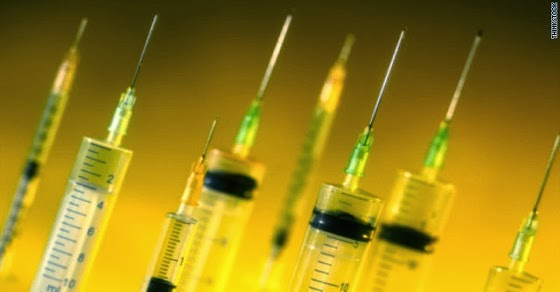 In their first year of life, babies are more susceptible to adverse drug reactions than older children. In the case of vaccines, this may be because vaccine doses are not weight specific. A premature baby receives the same dose as a bouncing 14 month old child. It could be because the blood brain barrier is not fully developed until the age of two. Infants’ immune systems are not fully functioning, yet in that first year alone they are to be injected over and over with several disease antigens in each single shot, and the known neuro and other toxins that accompany them. Injecting just the antigens alone that the immune system is designed to combat through the respiratory system or the gut is questionable. The acts of ingesting, inhaling or injecting the same toxin produce three very different results. Vaccine injury is much more pervasive than ever discussed in the mainstream media. In many cases neither parents nor physicians make the connection. Most vaccine side effects are listed on the manufacturers’ package inserts, something parents are very rarely asked to read.

In 1986, the US bestowed immunity from litigation on vaccine manufacturers. The reason? “Vaccines are unavoidably unsafe”. Vaccine litigation against the manufacturers was threatening supply. The US national vaccine court has since awarded more than $2 billion in no-blame compensation for vaccine-induced injuries. There are more than 500,000 reported adverse vaccine reactions on the CDC’s database (VAERS), and a study (Scott HD, 1987) reported in the American Medical Association’s own journal: JAMA, has estimated that only 1% of actual events ever get reported (JAMA. 1993;269(21):2765-2768. A New Approach to Reporting Medication and Device Adverse Events and Product Problems) so potentially the US has 50 million vaccine adverse events reportable. A small minority receive any compensation if at all. Among those compensatable adverse events are childhood diabetes, childhood rheumatoid arthritis, epilepsy, paralysis, brain damage – and death.  Lebanon has no vaccine compensation program.

Doctors and public health officials often use the mantra: ‘correlation does not equal causation’ to discount the relationship of reported reactions to the respective vaccines, yet they have no justification for doing so. By that same token it could be argued that there is no proof vaccines prevent disease. Each reported reaction is recorded because of a temporal relation to the vaccination, an obvious reason to suspect causation.  Parents are simply eye witnesses to the damage when it happens

Without proof or reasonable justification, health officials have no business in denying vaccine damage, while recommending the suspect vaccinations. Parents should be freely provided with all available information about adverse vaccine reactions, with accurate description of the nature of the potential injuries, both to acknowledge their parental authority and to fulfil the ethical mandate of informed consent.

Public health officials and paediatricians also often cite ‘herd’ (or community) immunity as a reason to vaccinate. The rationale is that if a certain percentage of the population is vaccinated, those opting out are protected by the herd. There are two reasons this argument is fallacious. The first is that ‘herd immunity’ was a theory postulated in a population with natural, lifelong immunity.  It was never proven to be true. The postulation was made in the 1930s by Hedrich. His theory was that if 68% of a population had succumbed to measles (and therefore had acquired a lifelong immunity), then the rest of the population would be protected from the disease.  Vaccines do not confer lifelong immunity by any stretch of the imagination. A vaccinated population refers to one section of the population, such as children. So for example, we are told that 97% of children in a city are vaccinated for measles and therefore the other 3% are protected. Unfortunately, children do not live in communities of children. They live in communities of adults. Those adults will not have had vaccines for rotavirus, pneumococcal conjugate, tuberculosis, chickenpox,  measles, mumps, rubella, diphtheria, tetanus, pertussis, polio, rotavirus, HiB meningitis, tuberculosis, seasonal influenza, H1N1 influenza, Hepatitis A, B, C, etc for many years or decades, if ever. Immediately, the so-called 97% coverage drops to 10 or 12%, depending on the ratio of infant to adult in that population. Herd immunity is a myth.

Though disease can leave damage in its wake, the threat as portrayed by the medical establishment

is grossly overblown, just as our natural ability to withstand disease is minimized. All vaccine ‘preventable’ diseases are preventable by other means and either a non issue in a healthy child or eminently treatable.

Vaccines do not confer lifelong immunity. If the vaccines ‘take’, immunity can be expected for anything from a few months to 10 years. There is evidence that vaccines can cause the very illnesses they are purported to protect against. This happens by a process of shedding. The live viruses, even though attenuated, pass through the child via bodily fluids often causing an atypical case of disease (eg atypical measles, chickenpox-like rash, etc). We also have large outbreaks of disease in vaccinated populations.

There is also a public health phenomenon, long recognised, called serotype replacement. This is where one disease is knocked out of circulation and another more virulent form takes its place. We see this is gut dysbiosis, in the antibiotic resistant strain of e.coli and staphylococcus bacteria, but also in mutated forms of pertussis and ‘infantile paralysis’ that are being reported around the world. This also happened with the meningitis strains where the least virulent form was initially vaccinated for and the more virulent but rarer form became more common. We see this also with the varicella vaccine. As children no longer succumbed to chickenpox, exposing those around them to it (which suppresses the shingles event), we saw more and more healthy adults succumb to shingles. Now healthy children get shingles, a disease normally associated with the frail elderly, stressed out executives and immuno suppressed individuals.

Vaccines are tested against other vaccines or vaccine adjuvants, the placebo is never benign. And there is no control group. Vaccine safety studies are conducted by the manufacturers and passed by the FDA. The FDA advisory boards are presided over by scientists and administrators from pharmaceutical companies. The FDA is currently seeking to further loosen board requirements to allow a closer interaction between the FDA and the industry. Vaccines are not tested for carcinogenicity or mutagenicity. We are not told if they can cause cancer or DNA mutation, despite the use of animal and human DNA being injected into children.

In Europe, ADRs (adverse drug reactions) are the 5th leading cause of death in Europe. In the US,  ADRs are the 3rd leading cause of death. As vaccines are also pharmaceutical drugs, they are no exception. Not only are vaccines pharmaceutical drugs, they are prophylactic and do not treat an illness. They are injected into perfectly healthy children.

Every country uses a different schedule so the vaccination schedule is not an exact science.

The US mandates 38 vaccines for school entry, the most aggressive vaccination schedule, and yet has the highest IMR (Infant Mortality Rate) in the developed world as well as the fastest growing rate of autism spectrum disorders. How then do vaccines make children healthier?

The UK does not mandate any vaccines.

This generation of children are showing unprecedented rates of auto immune (diabetes, cancer, arthritis and others) and psychiatric conditions such as those on the autism spectrum but also depression and learning difficulties. In the US, one in six schoolchildren have special educational needs. Another burden is allergy, also one in six children in the US. The rise in food allergies especially has finally been linked to vaccination and GRAS – ‘generally recognised as safe’ ingredients. It is only by investigating the applications for patents by specific companies supplying vaccine manufacturers that it has been revealed that some of the undisclosed ingredients in the manufacture of vaccines include food oils such as peanut and sesame and fish. Vaccines openly contain (among other things) antibiotics, mercury, aluminium, formaldehyde, animal and aborted human foetal DNA fragments, etc.

Children are today born with an average of 163 foreign chemicals in their bloodstream. We are raising a generation that still has infectious disease but is also under a heavy burden of chronic and debilitating lifelong illness. It is time we took responsibility and learned to lessen this toxic load. Vaccines are a part of this effort. Medicine should be used with understanding and respect, not abused and overused. This is a lesson we have already learned with antibiotics and superbug mutation. Nature’s gift of immunity should also be recognised and respected and supported through an intelligent practice of good hygiene, nutrition and selective medication.

Please. Do your own research. Investigate, weigh the risks and benefits before you vaccinate.

Package Inserts for US Licensed Vaccines can be found on manufacturers’ websites or:

http://www.hrsa.gov/vaccinecompensation/ACCV28Oct2010.pdf­     This UK link no longer works but here is part of what it said: “it’s only after extensive post marketing experience and surveillance that one is able to more fully understand the safety and the effectiveness of a vaccine. Only when the vaccine is given after it is licensed can you get a more complete picture of the vaccine’s benefit and risk, because any pre licensure study that you conduct can simply not be large enough to really look at very rare adverse events.”

Studies on immuno suppression and autoimmune effects of vaccination:

Human and Experimental Toxicology Report: Infant mortality rates regressed against number of vaccine doses routinely given. Is there a biochemical or synergistic toxicity?

Flu Vaccine in Pregnancy, Yes or No?

Evidence that the flu vaccine during pregnancy can cause stillbirth and miscarriage:

“Available evidence does not address the safety of Tdap for pregnant women, their fetuses, or pregnancy outcomes sufficiently.” BUT it is still recommended…

Adverse Drug Reactions in Europe are the 5th leading cause of death:

Questions to ask before vaccinating

“Despite massive cover-up by the vaccine industry, it is becoming obvious throughout the world that the childhood vaccine schedule is the worst disaster foisted on the human population in Earth’s history.”