Health Doesn’t Come Through a Needle By Dr Sherri Tenpenny 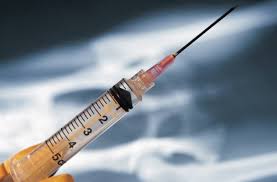 From Maine to Maui, Vancouver to Miami, autism rates across North America are soaring. As of February, 2010, there are an estimated 300,000 severely autistic children in this country – requiring nearly $9billion per year in services. Then numbers in Canada are equally staggering. Considering the country’s much smaller population, autism affects an estimated 190,000 children in Canada. And these numbers don’t reflect the millions of children “on the spectrum” in both countries.

Parents include OT, PT and speech therapy into their routine, approaching these activities as though they are a normal part of child development, like soccer and piano lessons. Doctors have started to say, “Well, two years is when kids get asthma”, as though becoming asthmatic is a growth milestone.

There is one unifying factor affecting children, from sea to shining sea. It’s not genetics; genetics between families are different. It’s not environmental exposures; some kids live in the Projects, some live in Gated Communities. It’s not food; some kids eat only organic, some eat mostly McDonalds. It’s not exercise; some kids are athletes; others are couch potatoes.

What touches almost all children and is the most likely ‘smoking gun’ for the epidemic of chronic illness and autism across North America (and beyond), are childhood vaccinations.

Vaccine makers and undereducated medical professionals claim vaccines eradicated diseases, but official statistics clearly document that the so called “vaccine-preventable diseases” were nearly eliminated prior to the release of the vaccines designed to prevent the illnesses. Vaccines arrived at the eleventh hour in nearly every case, and were undeservedly credited as the hero.

Infectious diseases come and go. They are part of life, just as childhood illnesses, such as chickenpox and measles, were a normal part of growing up merely a generation ago. With an immune system supported by clean water, adequate sleep, decent living conditions, reasonably good food, and a 25-OH vitamin D level >60ng/mL, few will be at risk of dying from an infection. In fact, few will even become infected.

Medicine and healthcare have become emotionally sterile. We have separated the soma from the soul, removing the spiritual lessons that can come from experiencing illness and knowing death. We cling to life using all methods and endless expense. Western medicine conveniently sweeps deaths from vaccines under the rug as if vaccinating were a civic duty and adverse outcomes are an acceptable, if untoward, part of good citizenship. If we truly come to this planet to learn lessons, then perhaps death – even the tragic and untimely death of a child – is an opportunity for us to learn and grow. But I digress…

We are inject animal cells, heavy metals, toxic chemicals and viruses into our bodies, then call it “prevention”, expecting shots to keep us well. Why have we allowed fear of illness to over-ride our common sense? Do we expect to always be happy, always be sniffle-free? Have we lost our minds, believing for more than 200 years that an injection can actually keep us well?

We have exchanged chicken pox for autism, flu for asthma, ear infections for diabetes…and the list goes on and on. In the zeal to eliminate relatively benign microbes, we have traded temporary illnesses for pervasive, life-long diseases, disorders, dysfunctions and disabilities.

High vaccination rates and low infection rates must not be the only measure of health. Indeed, North American, highly vaccinated children are the most chronically ill, most heavily medicated persons in the world. True health, no matter how it is packaged and sold, cannot come through a needle.

Dr. Sherri Tenpenny is an outspoken advocate for free choice in healthcare, including the right to refuse vaccination. She offers unique treatments offered at Tenpenny Integrative Medical Center for those who have been vaccine-injured. Visit her website.

The Best of Dr. Sherri Tenpenny